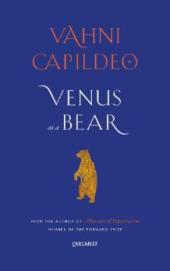 The Greek myths are never far from Vahni Capildeo’s collection Venus as a Bear (Carcanet). Although only directly mentioned once or twice, they sit behind the poems just out of sight, particularly the Ovid myths, because as the title suggests, this is a book of metamorphoses. Objects, animals, places and people become ‘other’ through language; but the ‘other’ they become is both entirely unexpected and not always easy to see.
More than in any collection I’ve read, this is one whose language is a tool for transformation, a means by which things are revealed in unhooking them from their traditional physical or metaphorical descriptions: we are shown things clearly and newly because Capildeo’s language works to bring them out of themselves. For example, we might find the complex shapes and light effects of eighteenth century cut glass in thirteen lines of Chomskyanly unlikely sentences, or the human body dissected in nine poems which border on concrete poetry and yet are not complete representations – there is a piece of a hip here, a suggested belly-button there, a clavicle perhaps?
There are certainly demands made of the reader who wants to find the clarity on offer. We should not expect meanings to be dangled in front of us for the picking; rather, and in the spirit of the book, meaning here is for the unpicking, the taking-apart, the un-piecing – and this is where the metamorphoses takes place because it is in the un-piecing of one thing that an accompanying piecing-together of another happens. We might need a dictionary or an encyclopaedia now and then, but what results is something new, and also something that was in the original all along, unseen.
The body is central to this collection, or rather bodies, because it is bodies’ proximity to one another and the flux between them that concerns Capildeo. Language is, as I say, a tool for transformation, but it is also the ‘matter’ or ‘material’ through which the flux occurs both between the bodies represented in the poems and between the poet and the reader (as is our nature: “we sentence things” says the speaker in “Moss, For Maya”, transforming an existing verb and verbing an existing noun). Throughout the collection, this exchange and interchange is reflected in part-rhymes (“impose/roses/clothes”), rhythmic echoes (“confusable with barnacles”) and almost-anagrams (“my enteared heart/my enearthed heart”). The words’ play with each other, their transfer of symbol, their passing-across of meaning and connotation creates a surreal and sometimes abstract imagery that could inspire multiple understandings, and which require not only imagination but also a willingness to engage from the reader.
Capildeo makes engagement easier for us in one way, and that is through the humour that is present throughout the collection. This is most often a low-key humour that suggests the tender bond between human and animal (“aesthetic chest-sitter”, “oink-oink-kiss”, “funny fuzzy     valuable wedges”), it sometimes comes through neologisms (“petcitement”), sometimes through punning (“my gods have changed their storey”) and occasionally in anger (“A great bull is shitting on my street. Let him have quiet enjoyment”).
The poet’s journey through Iceland, Britain and the Caribbean, where these poems were written, is another aspect of the movement, transfer, migration of meaning across and though bodies: land is a physical body, countries are political bodies perhaps, and the sea is a body of water.
Readers will have their own favourite poems of course, the ones which ‘work’ best for them (and the ones they ‘work’ best for) – my own is “Seastairway”, which is an evocation of rolling, tempestuous northern seas, whose relentlessness is expressed with the constant repetition of “sea” in various existing and invented compound nouns, and whose turbulence comes through in the indenting of lines and stanzas and the positioning of lines next to one another, as though inviting two voices so that their senses overlap the way waves overlap and overlay one another. But the poem is simultaneously a portrait (though I’m not sure that’s the right word) of the poet’s emotions, caught in a relationship with which she must “put up and shut up” i.e. put up with and shut up about. The corruption of the clichéd idiom denotes perhaps a clichéd or over-common situation, but also hints at a sense of threat and/or violence from the other half of the relationship (I assume male, but I may be wrong. ‘Put up or shut up’ is a phrase I associate with John Major, which brings in a masculine and political dimension that may or may not be intended). The speaker finds safety finally in the “seaport” of herself – or perhaps a lover: “I found/me, lady, right at your side”. The wanderer has arrived on land, a new body. She has either found someone new or become something new; whichever may be the case, there is, as throughout the collection, metamorphosis. Even the source of inspiration, the Anglo-Saxon poem “The Wanderer” slips into and out of another one, “The Seafarer”, while the chosen epigraph, “ofer waþema gebind”, can be translated (according to the online versions I found) in at least two different ways: “over the frozen waves” or “over the binding of the waves”. Is the speaker frozen, or bound? Or both, as they are related, but with very different connotations? The poem’s meaning is not fixed but what is to be found here will greatly reward the reader who spends time with it.

The book is bursting with ideas, every line bringing something new to puzzle, excite, amuse and delight. Even the titles themselves often look like mini-poems (“They (May Forget (Their Names (If Let Out)))”, “Leaves/Feuillles/Falls”). And this brings me back to the title of the collection, which is as multi-layered as everything else in the book, Venus as a Bear being inspired by both a visit to the Old Royal Naval College at Greenwich and, it seems, the song “Venus as a Boy” by Bjork. “He believes in a beauty” sang Bjork about her aphrodisiacal/Keatsian muse: “For they believed in duty” echoes the speaker here, about the mysteriously fanatical and well-spoken “cabin boys”. And as I look at the title, I find the final two letters of the two nouns are an anagram of URSA…so the language, as ever, is moulding and melding with the subject. Am I getting carried away, or is Capildeo, already in the title, “sentencing” Venus and Bjork’s Boy to ‘Beariness’ and all that goes with it? And I cannot resist finishing with one further question (because they keep on coming!): is Capildeo’s Venus a hairy goddess or a bald bear? This is not flippant. We know the speaker of at least one of the poems states amusingly “I choose to sing to the hairless”, which to me makes it seem unlikely that the feminine hairlessness of Venus would be transmogrified into beary-hairiness. So, what do we make of a bear divested of its fur? And where does The Velvet Underground’s “Venus in Furs” come into it, if at all? I’ll leave that one with you. Suffice to say that this is poetry to make you re-examine the way you read poetry, and there is little in poetry more exciting than that.

One thought on “We Sentence Things”