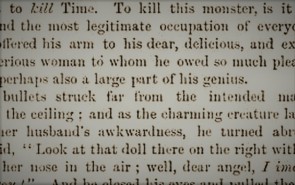 The Penguin Book of the Prose Poem, edited by The Sunday Times poetry critic and Senior Lecturer at UAE Jeremy Noel-Tod, has already been reviewed several times, both positively and negatively, and I’m not going to add to them here; but I would like to pick up a few points made in those reviews – particularly the negative ones – which I find interesting for various reasons relating to my own attempts to grapple with the prose poem as a form.
Kate Kellaway in The Guardian, while her adjective choices are sometimes a little breathless (“stupendous”, ”exhilarating”), makes some good points and she notes correctly that “the prose poem has always been a liberating space”, a nice phrase that sums up the general feeling of Noel-Tod’s introduction. The Telegraph and The Times reviews are behind paywalls, but they must also be positive as they awarded the anthology five and four stars respectively.
Such reviews are, in the opinion of that combative and grizzled Old-Schooler Craig Raine, “abject” and “docile” due to Noel-Tod’s “intimidating” introduction. He has a great time tearing it to pieces in his magazine Areté. Now. As much as I enjoy Raine’s habit of stalking the world of contemporary literature like the Phantom Raspberry Blower of Old London Town, his aim here is way off. It is motivated surely by bad blood (Noel-Tod is his former deputy editor at Areté and his former student at Oxford) rather than any real failing in the introduction, which is, for the general reader, very informative and accessible. Raine’s ostensible beef is, I think, that Noel-Tod writes too vaguely, using rhetorical flourishes and overly extensive end notes in order to hide his fuzzy thinking on prose poems. Even by Raine’s exacting professorial standards, he is being too harsh. This is “not an argument” he says derisively, but no ‘argument’ is intended: the introduction is meant to provide perspectives on a literary form that is more-than-averagely difficult to pin down; Noel-Tod is assembling a range of thoughts from people likely to be interesting and instructive, not developing a thesis. It is true that his own definition (“a prose poem is a poem without line breaks”) is a bit too minimalist to be much help, and that expressions like “….wayward relationship to its own form…” go the other way and ask the reader to make too great a leap from signifier to signified, but given that he is discussing a form “with an oxymoron for a name (Michael Riffaterre)”, the strategy of providing a spectrum of attempts to express its ‘whatness’ is as good an approach as any. And he compliments this with some features that are common to many prose poems (such as expansiveness, a tendency towards the imagistic, and towards metonym over metaphor), also supplying thoughts from various writers and critics on the two forms separately, poetry and prose, which fuse in this simultaneously too-difficult and too-easy hybrid. Again, this is a good strategy, which, although it didn’t leave me with a solid understanding of some pocket-sized definition, did provide enough different perspectives to allow me a ‘feeling’ for what a prose poem ‘might’ be, i.e. an expansive, loose, imagey, notey, cage-bar-bendy, echoey, metonym-y kind of thing. And I think that is about as much as I can hope for. Really, I don’t think prose poems want to be defined – they are radically ambiguous.
It is this sense of having to accept the form’s essential non-definability which I think lies at the heart of Jason Guriel’s complaint in his review in The Walrus. Guriel is a poet, and as far as I can tell not a bad one, who takes a reserved approach to what a poem ‘should’ be and so finds himself uncomfortable with the prose poem’s radical ambiguity. His tone is less splenetic than Raine’s, though he still sounds rather irritated. He does, however, raise the one point I struggle most with in connection to prose poems – that is, how are we supposed to know a good one from a bad one if the rules which govern what it is are so loose? To an extent this is a question that goes for a lot of contemporary poetry that doesn’t follow traditional forms, and critics often use that equally indefinable reason for their criticisms, that “it doesn’t work on its own terms”. The prose poem must present a double headache for such critics because it doesn’t even provide any terms on which it may or may not work. Guriel plays a sly trick halfway through his review, inventing a prose poem and adding it to a list of genuine ones in order to illustrate how craft-less their cod profundity really is. I have to admit that I was caught out here, and I felt (as Guriel no doubt hoped his readers would) slightly ashamed and ‘copped’ at not having been able to distinguish the genuine from the forged. Of course, with hindsight I can go back and backfill all sorts of reasons for being duped; and re-reading it I can see how he has used Noel-Tod’s introduction to write a sort of prose-poem-by-numbers.
Here is Guriel’s prose poem in full:

If nothing else, we could perhaps say that it is an expansive, loose, imagey, notey, cage-bar-bendy, echoey, metonym-y kind of thing. And you know what? I still quite like it, the way I might like a painting I know is actually crap but which gives me a pleasant feeling to look at, and so I keep it on my wall almost as two fingers up to the world. I think a lot of poems are ‘good’ in this sense – and of course there are those who are concerned that this is part of the ‘dumbing down of poetry’, and perhaps the recent increase in collections of prose poems, or including them, is seen as part of this trend.
But it is worth going back to the Noel-Tod anthology to see what the genuine prose poems have got that the fake one hasn’t. Here is The God of War (1949) by Berthold Brecht (trans. Thomas Kuhn), another poem that would fit my silly non-definition above:

I saw the old god of war standing on a stump, one side an abyss, on the other a cliff wall.

He smelled of free beer and carbolic and he showed off his gonads to the teenagers, the while some professors had rejuvenated him.

In his hoarse wolf’s voice he declared his love for all that is young. And there was a pregnant woman standing by, and she shivered.

And he continued without shame, presenting himself as a great champion of order. And he described how he created order in the barns, by emptying them.

As a man may scatter crumbs for the sparrows, so he fed poor people with crusts of bread he had taken from poor people. His voice was sometimes loud, sometimes quiet, but always hoarse.

In a loud voice he spoke of the great times to come, and in a quiet voice he taught the women how to boil crows and seagulls.

All the while he was uneasy in himself, and he looked over his shoulder time and again as if in fear of a stab in the back.

And every five minutes he assured his public that he was minded to make his entrance brief.

This is a poem that I don’t just want to look at but to touch, climb onto, open up, root around, delve into, investigate. Even though it is in translation (perhaps because it is in translation) there is something in the word choices, the images, the surprises, the repetitions, the themes that pulls me in, demands not only that I read and speak it but that I speak and write about it. Something, well, indefinable. And I can only express what I want to express about how the poem affects me through the metaphors of the previous sentence – how fuzzy is that? There is nothing in the Guriel fake that makes me feel anything like I feel when reading the Brecht. I used to mock Christians (when I did such things, git that I was, back in my Dawkins days) for their use of metaphor: “Well, of course you’d say God is Light because there is Light whereas there is no God”. But now I see that some things just do not trade in clear definitions – they need metaphor and analogy because they are made of something that conventional clarity cannot capture. And that’s okay. After all, a simple biological definition of ‘The Human’ would miss an awful lot of fuzziness around the question of what a human really is. If we were looking for a literary form to fit the contradictions and contrariness of the human character, perhaps we would choose one “with an oxymoron for a name”.
What Noel-Tod’s anthology has helped me understand is that knowing what a prose poem, or any poem for that matter, is is not the point, the point is what it does. I know a good prose poem when I read it because of the way it makes me feel, what hidden truth about the world it points me towards, what it makes me want to do after reading it, where it takes my imagination; and you can call it what you want. Some poetic forms afford us the comfort of a clear definition and Audenesque memorability, while others don’t. Equally, some readers require such clarity, along with the security of being able to say ‘I know this is good because it fulfils criteria A, B and C, which are all good things, and it bends criterion D, which is clever’. While others don’t.

You can buy The Penguin Book of the Prose Poem here.

4 thoughts on “The Prose Poem and Radical Ambiguity”